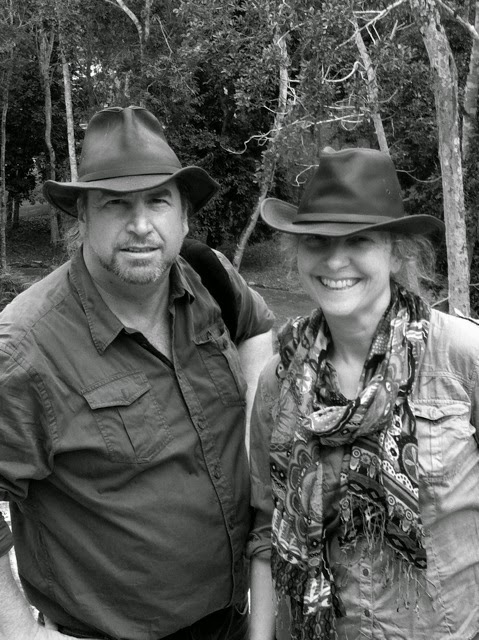 On today's writers series we'll be spending time with Jon and Pamela (J&P) Voelkel who are the author-illustrators of the Jaguar Stones series; Pamela does most of the writing and Jon does most of the illustrating.

Their books tell the story of a city boy and a jungle girl - a mirror image of Jon’s wild childhood in Latin America and Pamela’s altogether tamer upbringing in an English seaside town. The Voelkels met in London, where they both worked at the same advertising agency, and now live in Vermont.

And here is their latest book in the Jaguar Stone series: 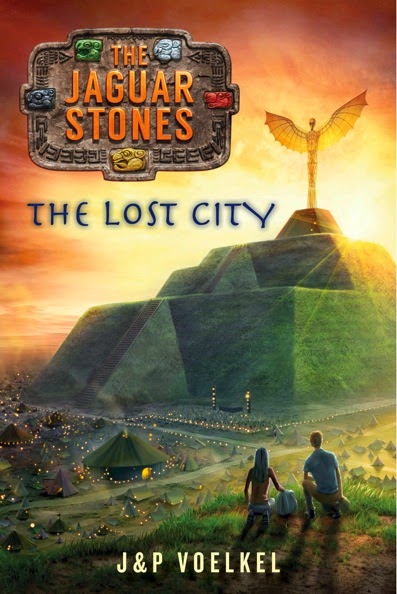 With his parents in jail and his best friend ignoring him, fourteen-year-old Max Murphy was pretty sure things couldn’t get much worse. But that was before a parade of Maya monsters crashed through his house and the Queen of the Bats tried to sink her fangs into his neck…

Meanwhile, down in the Maya underworld, the evil Death Lords have realized they’ll never conquer the mortal world without conquering social media. So with the bad guys on a charm offensive, it’s up to Max and his Maya friend Lola to reveal the terrible truth before it’s too late.

This epic conclusion to the Jaguar Stones series takes Max and Lola on their wildest adventure yet, north from the teeming rainforest to the lost city at the heart of America’s past.

How has your travel affected your writing process?

As we're sure many people find when they set off to research a story, the act of travel has a way of changing everything. In our case, we started out with a fast-paced Indiana Jones type adventure about a city boy who gets lost in the jungle. It was based on Jon's wild childhood in South and Central America, with the Maya pyramids as a suitably spooky background. But when we took our own kids down to Belize to explore some of those pyramids first-hand, we realized we were writing the wrong book. Firstly because almost everything we'd read about the ancient Maya was out of date; and secondly because the living Maya were just as fascinating as their ancestors. After that, we went down to Central America many more times and tried to learn new facts rather than validate old ones. It was talking to a group of Maya teenagers in Guatemala that inspired the character of Lola and she quickly became the center of things. It's a delicate balance because our primary goal is still to tell a fast-paced and funny adventure story. But now we also try to bring alive Maya mythology, make a case for rainforest conservation, and dramatize the predicament of modern Maya people. Hopefully, the social messages are subtly done, but we'd like to think our readers are sneakily educated while they're being entertained. We feel a responsibility to get things right, so all our books are fact-checked by a leading archaeologist. And because there's still so much misinformation about the Maya on the internet, we share our research with teachers via downloadable reading guides and free lesson plan CDs. So you could say that our travels have driven our writing process and inspired everything we've written.

What was the hardest thing about writing The Lost City?

The hardest thing about writing The Lost City was knowing it was the last Jaguar Stones book and that we'd have to say goodbye to all the characters we'd come to know so well. It's not that we wanted to extend the series - we always knew where it would end and we'd written the very last paragraph right at the beginning to keep us on track - but the books had become part of our lives. In fact, we were already on borrowed time because the series was originally planned as a trilogy but the story took on a life of its own. Mostly writing The Lost City was pure fun. Unlike the first book in a series, where you're establishing your world and your characters, you can relax and go with the flow. It's the difference between walking into a room full of strangers and going to a party with old friends. When we wrote the first book, Middleworld, we were terrified that readers would lose interest if we stopped too long for descriptions, so the story moves at breakneck speed. By the time we got to The Lost City, which is the fourth and final book in the series, we'd established a rapport with our readers and we knew which bits they liked because they told us. Some of them even emailed us plot ideas and requests. It's impossible not to be buoyed by that kind of support! So it's going to feel kind of lonely starting from scratch again...

What are you writing next?

Please ask us anything but this! It's become a kind of superstition not to talk about the next book until we have a decent first draft. It's like you can jinx a book by talking about it too much. You feel almost like the book is written but, in reality, all you've done is talk. And if the Jaguar Stones has taught us anything, it's that the book you think you're going to write may not be the one that wants to get written.

Jon and Pamela, thank you so much for spending time with us!

Anita Saxena
I write YA & MG. Represented by Adriann Ranta of Foundry Media. When I'm not writing, I'm skating my heart out on the ice. I also blog over at http://kickbuttkidlit.tumblr.com. SCBWI member. Want to say hello or have a question? I can be reached at: anita at anitsaxena dot com. Blog header designed by Author/Illustrator Thomas Taylor.